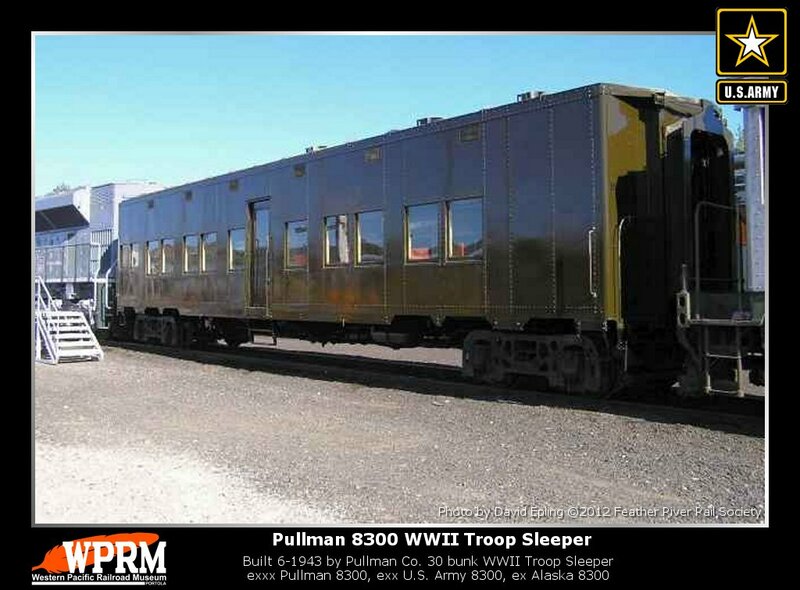 During World War II, mobilization of fighting troops by rail resulted in huge increases in traffic. Passenger miles would quadruple during 1940-1944.

The basic challenge was made worse by a lack of equipment and a War Production Board that would not allow the building of new passenger cars. A solution was found when the Pullman Company constructed a total of 2,400 troop sleepers between 1943-1945.

Pullman 8300 was the first car of the second order built by Pullman. Equipped with 30 bunks set in ten banks three high, the car was designed to be comfortable, but basic and thus easy to build.

The middle and lower bunks converted to daytime seating and each car included four washbasins and two restrooms. Each bunk set included a weapons rack and a place for footlockers.

Car 8300 went to the Alaska Railroad after the war, where it was used as a maintenance-of-way bunk car. After MofW use, it was being used as a bunkhouse for a youth camp in Alaska when Norm purchased it. Never substantially altered, the 8300 is a fine representative of a unique care type that provided crucial military service on many railroads, including the Western Pacific, during the war.