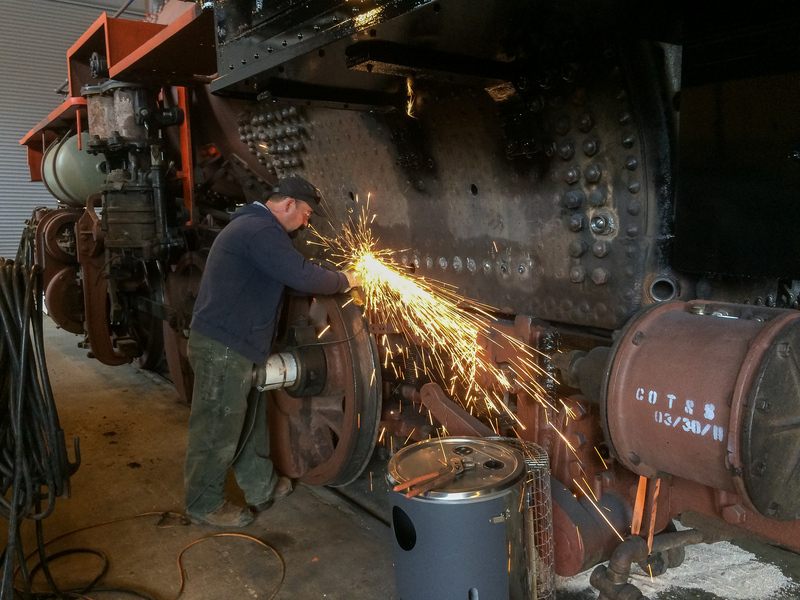 Western Pacific 165 is an 0-6-0 switching locomotive built by the Schenectady Works of the American Locomotive Company. This engine was used at many of the WP’s railyards, including Stockton, Sacramento and Portola. It was built in November, 1919, for the United Verde Copper Company of Jerome, AZ, as their number 87. On September 17, 1927, the 165 and three sister UVCC engines were sold to the WP and become the road’s S-34 class, numbered 163-166.

These burly switchers supplemented WP’s 12 existing 0-6-0s. The 165 last operated in March, 1953, as WP was winding down its steam operations. The engine was retired in October, 1957. Five years later, it was donated to the City of San Leandro. The engine was displayed for many years at the San Leandro BART station before being transferred to the Alameda County Fairgrounds. It was later acquired by the Pacific Locomotive Association and came to the FRRS in a trade with a later owner.

On March 1, 2006, the 165 returned to Portola on a museum flatcar, marking the return of WP steam power to Plumas County for the first time in nearly 50 years. Work has now begun on a restoration of the engine, hopefully to complete operation.