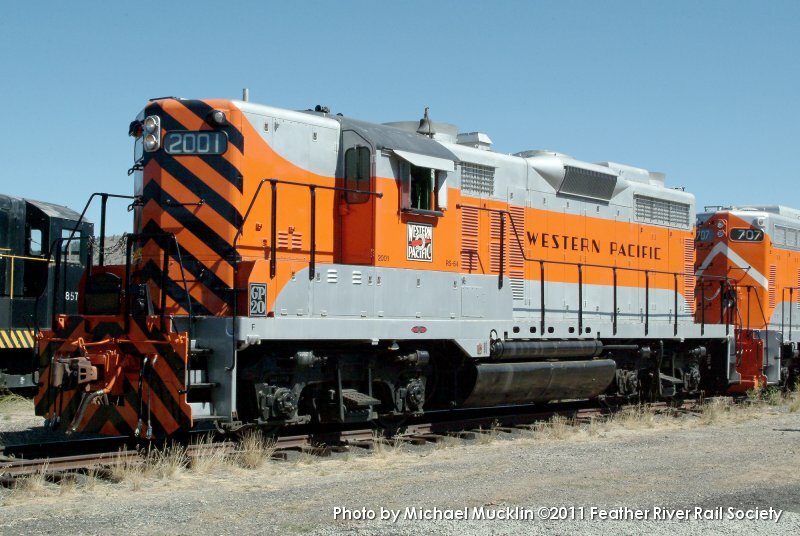 While it was one of the smallest of the major US railroads, the Western Pacific was often a leader in adopting new technologies and new ideas. One of the most notable is represented by this locomotive: WP 2001.

In the late 1950’s, diesel locomotive builders were beginning to toy with new ways to increase the power of the engines in their locomotives. Several had turned to turbocharging, but the Electro-Motive Division of General Motors (also known as EMD), the industry leader, resisted due to fears about poor reliability. Finally, in 1959, it introduced two new models supporting the company’s first turbocharged engines: the six-axle SD24 and the four-axle GP20. Western Pacific was the first railroad to purchase the GP20 and the 2001 was the very first GP20 built.

The 2001 and her nine sisters served the WP for over 20 years, lasting until a few years after the December 1982 merger with the Union Pacific. They worked nearly every task the railroad had, from priority mainline service to the lowly local trains. Retired in early 1985, the 2001 was requested by donation by the WPRM.

Due to its historical significance, the 2001 is considered one of the “crown jewels” of our collection. A full restoration of the locomotive, including repainting into its original “Zephyr” paint scheme, was completed in 1999 in time for a much-heralded debut at the California State Railroad Museum RairFair in Sacramento that year.

More information about the WP2001