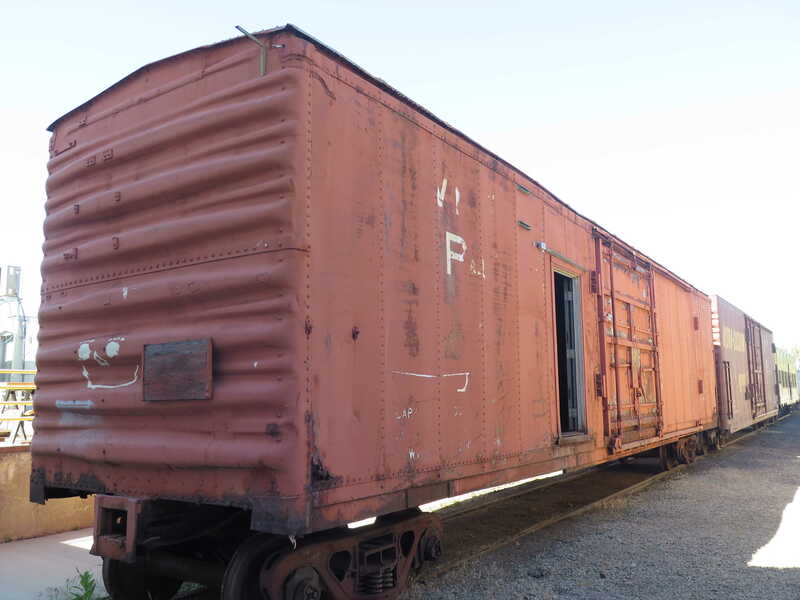 This boxcar was donated by the hospital in Chester, California to the museum. It was built and delivered to WP in December 1957 in the 56001-57000 series by Pacific Car and Foundry. The car was delivered in the mineral red, yellow and orange “Rides Like a Feather” scheme. It had the 8-foot 2-inch wide PC&F plug door and 50-ton Barber S-2 roller bearing trucks. In October and November 1972, it was sent back to PC&F for re-manufacture. It came back with new 10-foot 6-inch plug doors. It also had the new slogan-less white lettering in a darker brown paint.

The car’s first road number was WP 56059. After the rebuild in 1972, it was renumbered as WP 61180. It probably derailed in Chester at Collins Pines on its first revenue run. WP then probably refused to take it back after it was on the ground. Collins Pines had no use for the boxcar, so they donated it to the hospital in Chester. It sat on the hospital grounds and was used for storage for almost 50 years. On June 23rd, it was loaded on a lowboy trailer by Bragg Crane and moved to the museum. Once at the museum, it was set on a set of trucks and rolled to its new spot on One rail. It will be used for archive storage after some repairs are made.

This car is different from others in our collection and is set up with shelves and power. The plan is to use it as an additional archive storage facility, equipping it with climate control and fire suppression.

More information about the WP 61180